By happy chance my recent holiday in the south of France co-incided with the annual “Journées Européenes du Patrimoine”, the French equivalent of our Open House weekend.  By even happier chance I spotted in the local paper that an interesting sounding garden in Cannes was opening for the event, near where we were staying.  Situated in the hillside area of Cannes known as La Californie, the gardens are usually firmly closed to the visiting public, as they form the grounds of a super-smart apartment block, Les Residences Champfleuri.   We arrived at the gates of the property in good time, and discovered that it’s not just Brits who adore a spot of garden nosey-parkering: 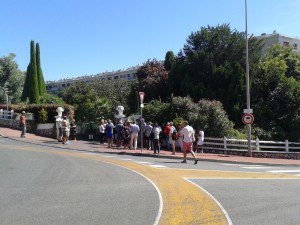 There were in fact so many of us that, once through the hallowed portals (which were closed pretty smartish behind us), we were given an overview of the gardens’ history before being divided into two groups to be led around the gardens by students studying tourism, with a sprinkling of  well-informed residents and  the 3 gardeners who tend them on hand to answer questions.

Although the current Champfleuri apartment block dates from 1961, the gardens in which it sits pre-date it by several decades, having been created in the interwar period by  Danae  & Marino Vagliano , a wealthy couple of Greek extraction who owned the 19th-century villa that formerly occupied the site.  The couple bought the villa in 1923 and Danae Vagliano, a keen gardener who had already created a garden of note near Windsor, set about creating a fashionable ‘world garden’ featuring typical gardens from different countries.  The villa is long gone but amazingly Danae’s gardens have somehow more or less survived both the passage of time and the rampant postwar development of the Cote d’Azur, and are gradually being restored. 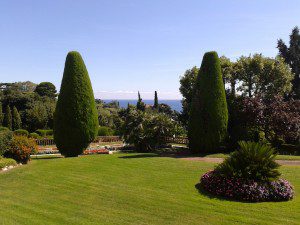 Garden with a view

The gardens certainly make the most of their elevated situation, with idyllic views out to the Mediterranean and the Iles de Léirins, sweeping English-style lawns,  mature specimen trees, and a sequence of themed gardens, many of them carved out of terraces on the hillside. This being a sunny Mediterranean garden, cypress rather than yew or box provides the topiarised ‘room’ dividers, the loop apparently being the shape of choice here: 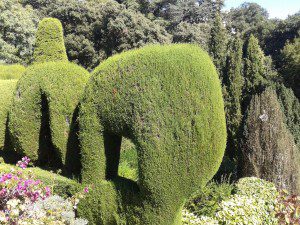 Extending the idea of the traditional Japanese stroll garden (which take the form of a symbolic ‘tour’ through the landscapes of Japan), Daneae’s Cannes garden roamed to Andalucia, Moorish North Africa, Holland, Italy, Provence, England as well as to Japan.  This latter garden, which occupies a ravine like space the lowest point of the grounds, is the most realised of all the themed gardens.  It’s as kitsch as Christmas and as just as much fun, ticking Santa’s oriental wish-list with Gallic élan – the lucky residents of Champfleuri enjoy cloud-pruned yews, pine trees of various ilks, rustling bamboos and acers, ornamental pagoda, a red-painted wooden bridge and stately Koi carp and Mandarin ducks patrolling the naturalistic ‘river’. 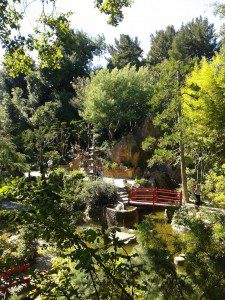 The gardens, despite the disparate geography they evoke, all share the common theme of water.  The Dutch garden has a Delft-tile lined canal, while a  formal pond is the centrepiece of the immaculately coiffed Italian (more specifically, Florentine) garden. 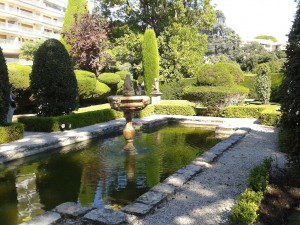 Unfortunately, the water features in the other gardens have fared less well.  The rills and ponds that once cooled the Moorish and Andalucian gardens are dry, awaiting restoration. 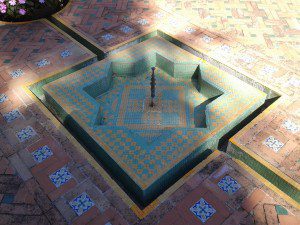 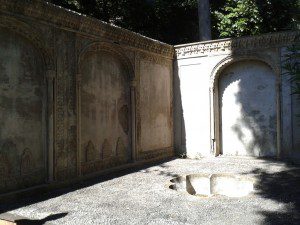 Despite the lack of water, the Andalucian garden looked like it was popular with residents.  A bridge table was set up in the pretty tiled loggia, and the gardeners had filled the empty ponds with tubs of colourful flowers.  The loggia is also home to a memorial to Hélène Vagliano, Danae and Marino’s daughter, who was interrogated, tortured and shot by the Gestapo for her work in the Resistance.   Showing amazing resilience in the face of sustained abuse, Hélène refused to betray her colleagues (she eventually supplied her tormentors with fake names to lead them on a wild goose chase around France); her courage was honoured with a posthumous Legion d’Honneur.  A poignant reminder of the dark days once endured in a place now more readily associated with sunshine and the glitz of the annual film festival. 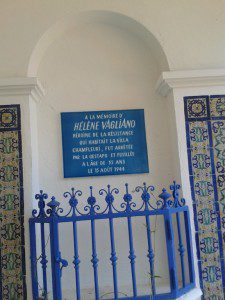 Stairs are another recurring feature in this hilly garden and the gardeners have made good used of them.  On the day of our visit the pergola stairs which lead down to the Moorish garden were lined with a sequence of suspiciously freshly planted coleus (in the traditional manner of open gardens everywhere).     Tucked away behind the loggia, a pleasingly architectural grouping of well-established exotics, accompanied our progress up the steps leading to the Italian garden:

A more extensive planting of exotics overlooks the residents’ tennis court and two swimming pools (sadly out of bounds to us day trippers). 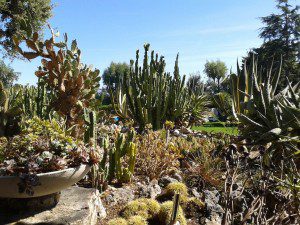 Extending to some 3 hectares, the garden contains around 500 species, including some magnificent specimen trees such as Magnolia grandiflora and the native Quercus pubescens (or chêne blanc as it is known in France), some of which carry identifying labels more in keeping with a public garden, but no doubt appreciated by horticulturally inclined Champfleurians.    Head gardener Gilles Dowois and 2 assistant gardeners are responsible for keeping this slice of paradise in order  – a far cry from the rollcall of 30 staff who used to maintain the villa and its grounds back in the day. 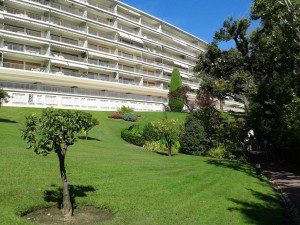 The gardeners’ quiet pride in their work was evident on the open day – and justifiably so, since  the garden looked radiant  for its annual public airing (although on the evidence of this one visit, French open garden events seem very different from their British counterparts, with a signal lack of  tea and homemade cakes – the twin pillars of the open garden experience).  Lack of baked goods notwithstanding, the Champfleuri opening is obviously a much-anticipated event in the Cannes calendar,   as we walked back out on to the sunny streets of La Californie, we spotted another large and eager group waiting to be let in to this hidden treasure. 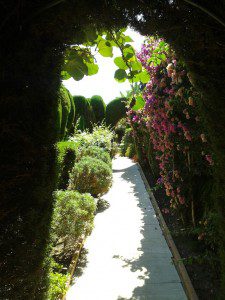