A walk in Edford Wood

One of the highlights of last weekend’s Shepton Snowdrop Festival was a guided walk through Edford Wood to see snowdrops growing in the wild. 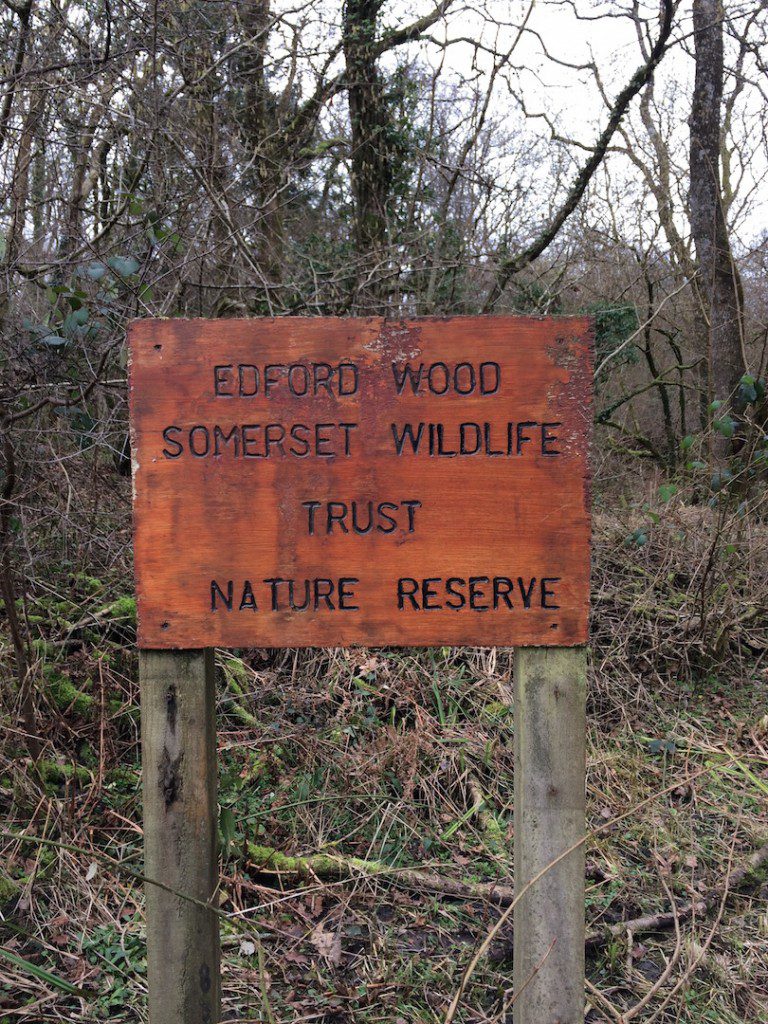 The wood, which is owned by the Somerset Wildlife Trust, is a designated ancient woodland, meaning that it has existed continuously since 1600. It mainly seemed to be made up of coppiced ash, with a sprinkling of other species, including yew. Although the size of our group (about 40 walkers) precluded us seeing much in the way of fauna, the variety of flora that we encountered more than made up for this. 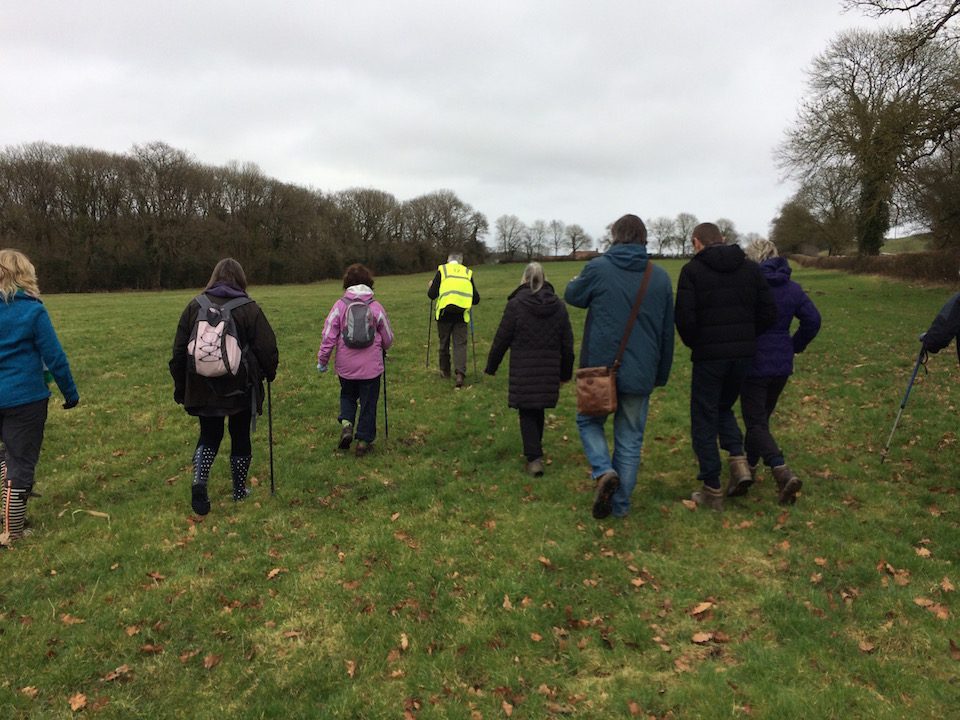 Following a roughly circular route through the wood we came across bright red Elf Cap fungi, growing like terrestrial coral on fallen branches beside our path. 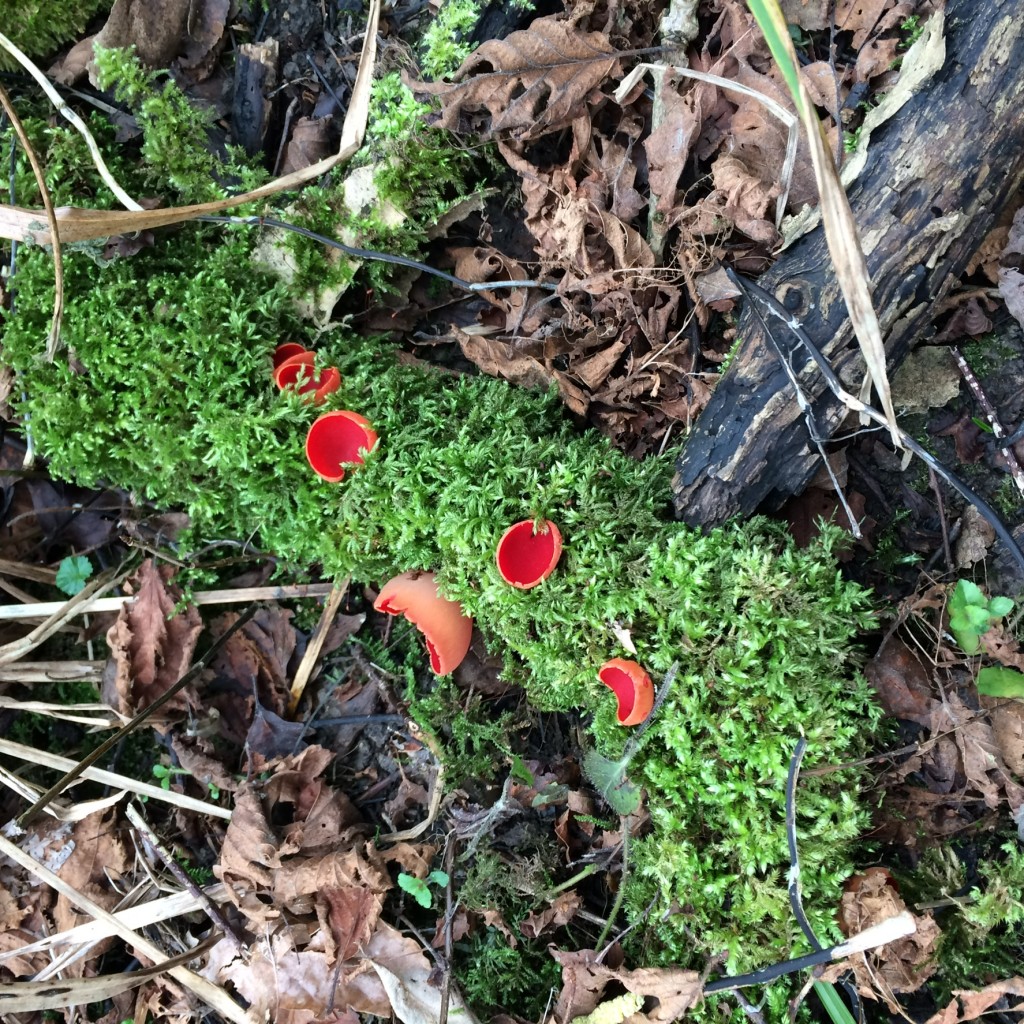 We also saw colonies (not sure if this is quite the right word) of aconitium, the very poisonous monkshood, their fresh green young leaves standing in vivid contrast to the predominantly brown woodland floor. 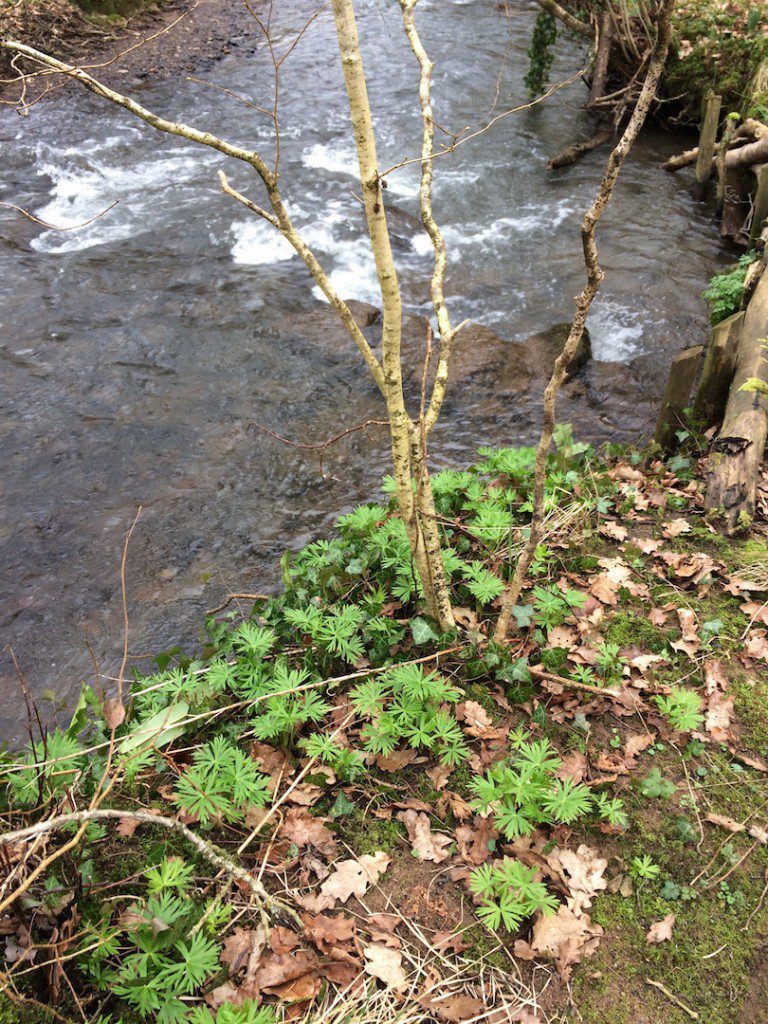 Wild monkshood, by the Mells River

I also spotted what looked like euphorbia, but I don’t know what variety. It was a bit straggly – garden escapee or a wild (native?) variety? 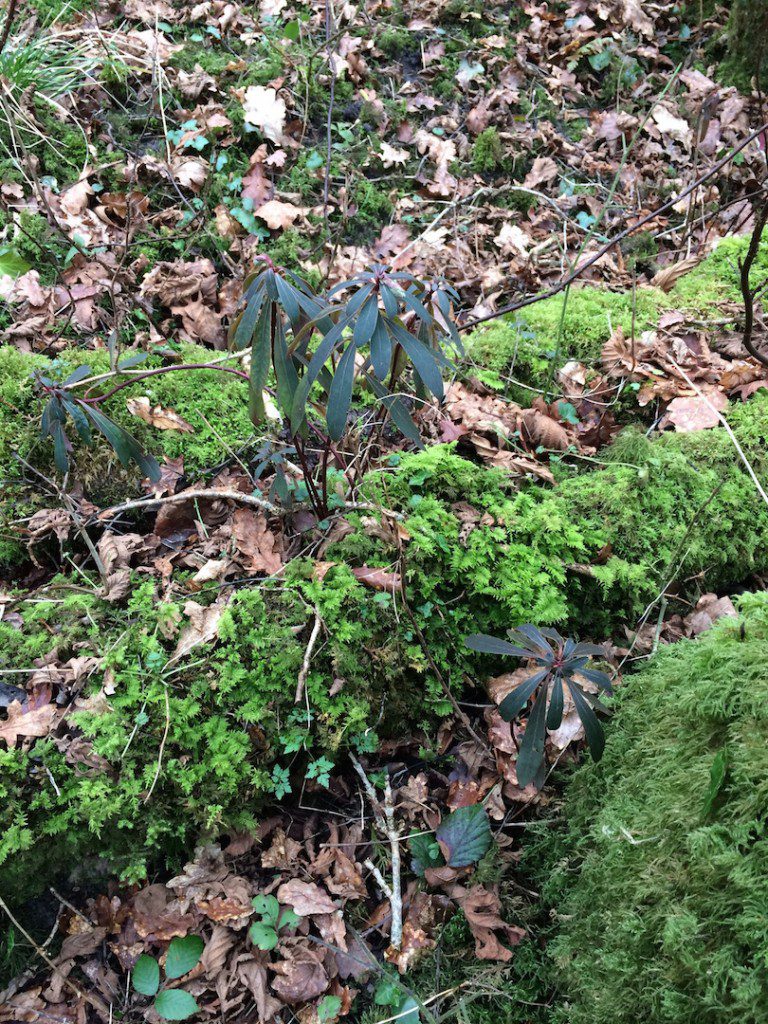 Edford Wood is also known a place to see native daffodils and these were already in evidence, with one or two just about poised to open into flower. We were perhaps just a week or two early for the daffodils, so those few that we did see were a bonus. These native daffs are much stockier than the leggy varieties that tend to be used in garden scenarios – but to my mind these shorter stems would be much better suited to a garden (I am not keen on daffs in a border setting, particular in the aftermath of flowering when the foliage looks so messy). 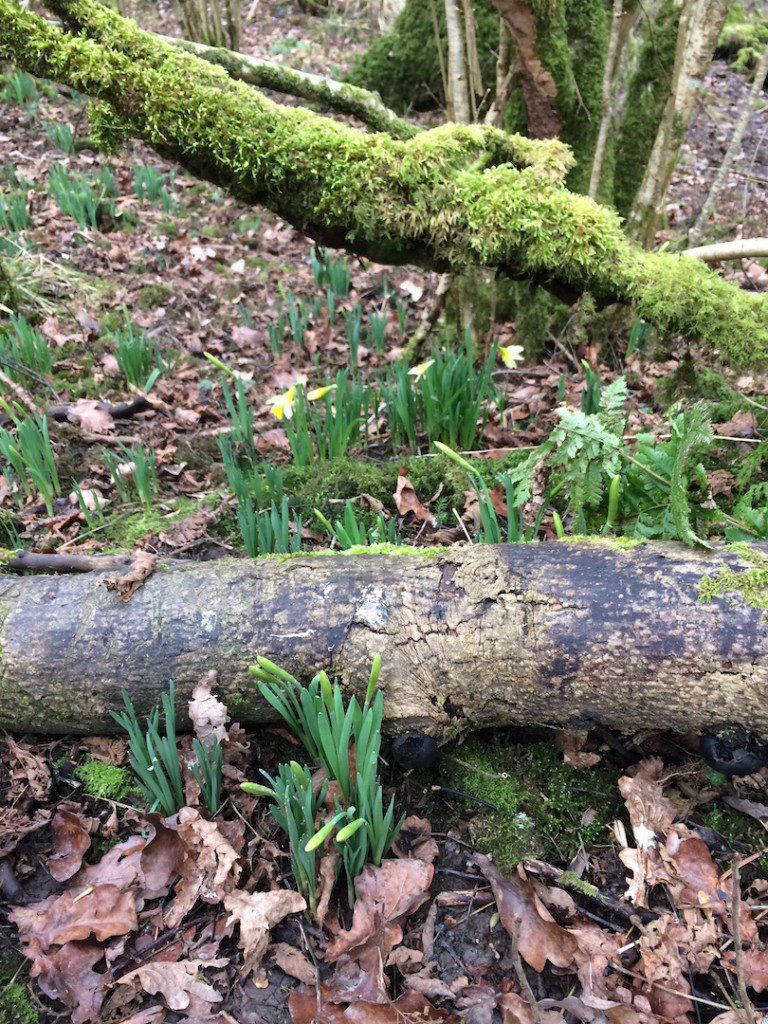 As for the snowdrops, these were not quite as numerous as I had anticipated, but there were plenty to see nonetheless and it was indeed lovely to see them in a winter woodland setting. Our route took us along side the meandering Mells river, and this is where the snowdrops looked their best, obligingly arranging themselves in attractive clumps on the river bank. It’s tantalising to wonder if James Allen ever walked these woods in search of rogue snowdrops to breed from; certainly seeing them growing wild made a refreshing contrast to the rather artificially imposed clumps that dot my own garden. 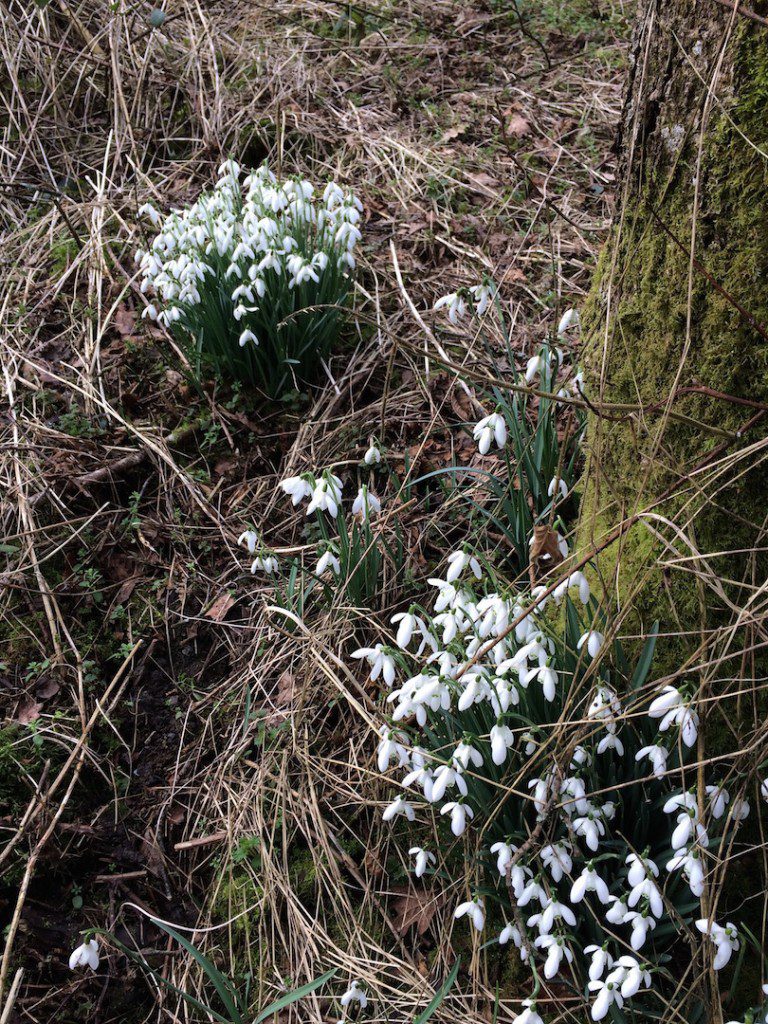