Quick update from the allotment … these photos are from a couple of weeks ago, so things have already moved on since then, but I am posting these just as a reminder of how, when spring gets going, how quickly things start happening.

Compare and contrast my February picture of the rhubarb with this unstoppable triffid: 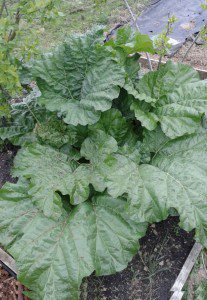 And I’m chuffed to bits with these little beauties – the freebie spinach seeds found in the shed have germinated and are romping away.  It’s the first time I’ve grown ‘proper’ spinach as opposed to tough-as-old-boots beet spinach and I’m a convert.  We seem to be able to pick it on an almost daily basis – a real cut and come again number.  Just in case these ones run out of puff, I’ve sown another couple of lines to take their place when the time comes. 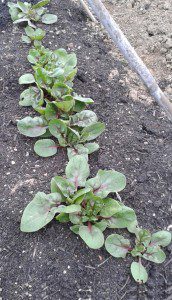 Of course, it’s not just the plants that are growing, the grass (and weeds therein) are making a bid for world domination.  As we don’t want to spend all our time on the lottie mowing and strimming in a rearguard action (been there, done that and not keen on returning), we’re putting some of the paths under a membrane and bark mulch.  It’s beginning to look a bit tidier, but the old bank balance has taken a bit of a hit. So much for the plan of foraging everything for the allotment infrastructure but hopefully it will be a small price to pay in the long run. 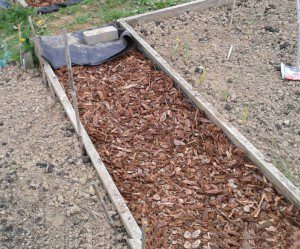 Mulch ado about nothing

The paths are not the only things to undergo plastic surgery – these little strawberry plants had been left at the gateway to the allotment, presumably allotment code for ‘we are surplus to requirements, please take me’ (gosh, I hope that was what it meant …).  Anyhoo, we scooped them up and popped them in a freshly dug but still rather weedy bed.  The black plastic will keep the weeds at bay, warm up the soil and hopefully protect the fruit, when it appears,  from muddy splashes.  Since this pic was taken, the strawberries have really filled out, and are covered with flowers so things are looking promising 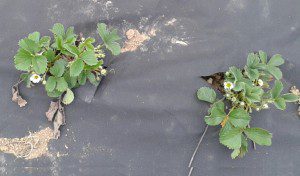 In other news, the pink fir apple potatoes have emerged from their earth ridges, the dahlias likewise (just in time to get lightly scorched by a surprise frost last week), but the gladioli are doing well.  Yesterday in a lightning raid on the plot, I planted out  borlotti beans plants by the wigwams we built last week, sowed yellow and ‘cosmic’ purple carrots (separate varieties, not variegated!) and resowed a few rows of parsnip too as there’s been no sign of the ones I sowed back in Feb/March. It will be interesting to see how long they take to germinate – they do take their time.  Unlike the  grass,  which I can almost hear growing from here …