An Eminent Victorian in Surrey

Londoners probably best know the work of the great Victorian artist GF Watts less through his paintings than through two very different installations in the capital.  The first is the Memorial to Heroic Self-Sacrifice in Postman’s Park in Aldersgate, the unique memorial initiated by Watts in 1900 to commemorate the bravery of ordinary people; the second is his monumental equestrian bronze statue Physical Energy, which has been a powerful presence in Kensington Gardens since 1907.

Hailed as “England’s Michelangelo” in his lifetime Watts was such a towering figure in the Victorian cultural firmament that he was able to, shortly before his death in 1904, commission a purpose built public gallery to house his studio work.  Watts’ reputation dipped in the 20th century (although Roger Fry was a fan) but latterly his star has risen again and in 2004 the NPG staged a big centenary retrospective of his society portraits.  Incidentally, the NPG (one of my favourite London galleries, as readers of Museums & Galleries of London will know) is always a good place to see Watts’ portraiture, Room 26 being home to some of the be-whiskered eminent Victorians the artist painted as part of his  “Hall of Fame”. The display also includes Choosing, Watts’ iconic portrait of his first wife, the actress Ellen Terry.

Recently the subject of a comprehensive £10m restoration project, the newly revitalized Watts Gallery offers the perfect opportunity to get to know (and perhaps appreciate the finer points of) Watts’ oeuvre, which embraced hard hitting social realism, history painting, allegorical symbolism, as well as more conventional landscapes and portraiture. 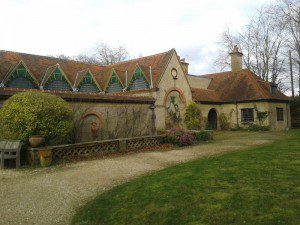 The gallery itself – a fine Arts & Crafts building by Christopher Hatton Turnor – is tucked away in the Surrey village of Compton, where Watts and his artist wife Mary had settled in 1891.   Its historic top-lit galleries, resplendent in their original decorative scheme of rich red and icy turquoise wallpapers, display a permanent collection of around 100 paintings, including famous compositions such as Found Drowned and Paolo and Francesca. 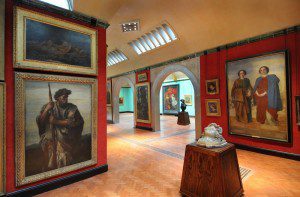 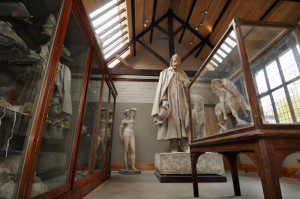 A trip to the Gallery would not be complete without making a short pilgrimage on foot to the Watts Cemetery Chapel.  This extraordinary red brick and terracotta building was designed by built by Mary Watts and a team of village artisans, who worked in the Pottery that she founded at Compton. 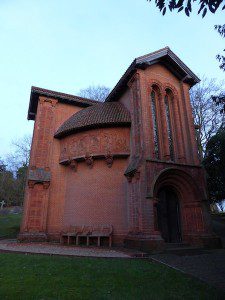 The small centrally planned chapel is a riot of decoration inside and out, a mad medley of Oriental, Romanesque and Art Nouveau influences and a striking example of social philanthropy (the pottery and the chapel’s construction were partially designed to keep the villagers away from Guildford’s gin palaces nearby). 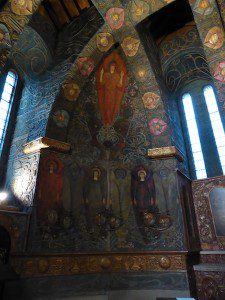 A walk around the graveyard reveals that the Compton Potters also had a niche sideline in making terracotta grave furnishings and grave makers for their local cemetery.  Fittingly, the graveyard provided the final resting place of George and Mary Watts, and it is also where Aldous Huxley is buried. 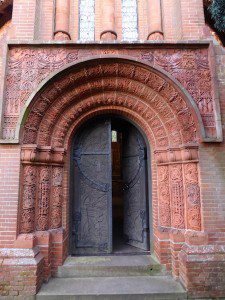 The Compton Pottery flourished until 1955 (Mary Watts having died in 1938) and the Gallery holds an important collection of its work.  The building that was once the pottery showroom today houses the Gallery’s bustling tearoom, which is a popular haunt of walkers on the North Downs Way as well as with art lovers.  For those not travelling on Shanks’s pony, the Gallery is easily accessible by public transport (for those arriving by rail, four trains an hour depart Waterloo for Guildford Station, from where the Gallery it is but a 5 minute taxi drive; alternatively catch the 46 bus from Guildford bus station).  Whatever means of transport you choose, you will not be disappointed – the Watts’ Gallery is a fascinating, and completely unique, destination. 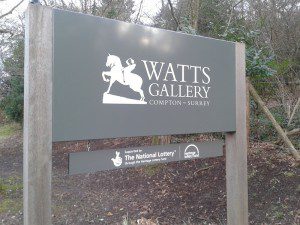