Autumn on the Allotment

So, autumn is here and another growing season on the allotment has more or less come to an end (bar some stalwart Swiss chard,  a few lingering, enormous beetroots, and some brassicas yet to come on stream).  What with the recent Marmite scare and the news that olive oil is going to become more expensive than gold (thanks, Brexit/climate change/nasty olive bugs), it looks like next year it will be worth trying to make the allotment as productive as possible as food  prices are surely only set to rise.   So although I’ve no plans to convert the plot into an olive grove quite yet, the general gloom has got me thinking about what to grow next year, and to try to assess what has grown well this year, and what has not.

In fact ‘next year’ has already begun, in that I’ve planted some garlic – two pretty basic varieties from our local hardware shop: Germidor and Thermidrome), and sown four rows of Aquadulce broad beans. 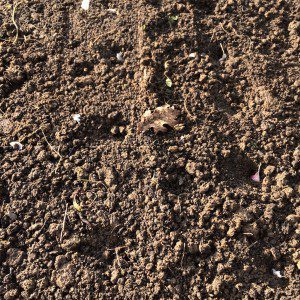 Broad beans were among the star performers of 2016, at least the ones that were sown in the previous autumn – my attempt at successional planting in this department failed as the spring sowing fell prey to predator or predators unknown (birds/rodents are the likely suspects). But successional planting may well be the key to successful post-Brexit allotmenteering, so next year it looks as though I’ll be having to take pest control a little more seriously.

Runner beans too did well – in the end, after a wobbly start.  I sowed some at home in modules, and then some in situ as a safeguard but the end result was the same: the slugs had a field day.  I felt too discouraged to sow more or dig up the sorry little stumps that the slugs had left but for once inaction was the right thing to do – by some miracle the beans resurrected themselves to perform well towards the end of the summer (it wasn’t their fault that their moment of peak production coincided with our late summer holiday and that we couldn’t pick them as young and tender as Monty Don recommends).

The French beans  (a variety called Kentucky Wonder, purchased from Pennard Plants) and the Borlotti beans were not quite as robust – a few specimens soldiered through the slug assault, but the crop wasn’t brilliant.  I’ve kept the pods  to use the dried seeds in stews etc. In the case of the Borlotti’s there are enough for a single meal, cooked in this way.  Must try harder next year!

Crops that did unashamedly well were the squashes – Turk’s Turban (from last year’s saved seed, a real result), and Rouge Vif D’Etampes pumpkin did brilliantly.  I got around 9 really decent sized pumpkins and a good handful of TT.  I’ve already save some TT seed from this year and will be doing the same with the Rouge Vif, as they are expensive to buy.  Courgettes too were excellent and I’ve only just stopped picking the last few tiny ones that would only have got knobbled in the frost that’s forecast for tonight.  Romanesco were the variety and I planted out four plants – two too many probably, but I adore courgettes and can stand a glut of them.

I went a  bit mad on beetroot this year and they too produced a good crop.  I hope to repeat this next year – I know all the foodies recommend the Chioggia variety and I have grown it in the past, but I prefer the full-blooded red types such Pablo, an AGM winning F1 hybrid, and good old Boltardy.

Rhubarb.  But when does it not do well? I should have made some chutney.

On the flower front, all the perennials bloomed their little socks off – from gaudy gladioli, to some luscious purple and yellow lupins (grown from seed, and so even more rewarding). We inherited quite a few dahlias when we took over the plot, and added a few more (not realising that we had so many already) and these have only just ground to a halt.  They overwintered last year just fine, and I’m hoping they’ll do the same this time around. I’ve spotted some rather sweet mini pompom varieties in a neighbour’s garden, which might be a bit easier to give vase space to than the rather hefty types we have, so I’ll probably try some of these smaller bloomed varieties when the time comes. 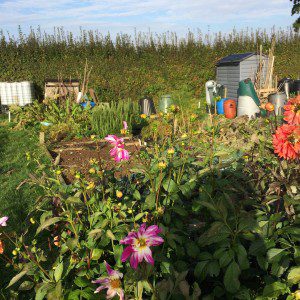 And those crops that didn’t fare quite so well?

Parsnips.   A complete no show, even though I did buy fresh seed. I diligently went for a February sowing, but perhaps this was too early.  The chair of the allotment committee, a former professional gardener, told me he had sowed his seed in March and promptly went over to his plot to dig up a beautiful parsnip, the fruit of said sowing. It’s always good to learn from your fellow allotments!

Lettuce.  Poor germination, and then the dreaded slugs.  Rocket did okay though, but it’s nice to be able to have mixed leaf salad instead of pure pepper.  Next year might have to be the year of the slug pellet (an organic variety).

Redcurrants and blackcurrants.  A pretty thin crop.  I think I may have overpruned them, and a heavy dose of sawfly didn’t help them either.

Potatoes.  A light crop from the tatties  carefully selected at our local Potato Day – Cara, Desiree, Belle de Fontenay and Anya. I’m putting it down to the dry conditions.  Blight struck (as it always does on our plots) so I cut down all the foliage as our allotment committee commands us to do, but I don’t know how much this will have affected the crop.

Onions.  A bit on the small side.  Again, I think this was down to the weather.  I brought a mixed bag of white, red and yellow onions from Potato Day – a mistake, on reflection.  Next year I’ll plant more sets but I’ll choose individual varieties, including a red one for sure, but I’m going to go for quality as well as quantity, as onions are such a staple for us.

So what are my resolutions for next year? Try to make better use of the space – I either seem to plant too far apart, or too close together. Perhaps I’ll break the habit of a lifetime and use a line to lay out the rows.  I’m also going to aim to improve my successional sowing and keep weeds and pests under better control – more regular trips down to the lottie should help with this.  I’m very tempted to put some more fruit trees in – we have one small and unproductive apple we inherited, and I took out a dead plum tree this year – nothing fancy, maybe a dual purpose apple, and a Victoria plum.  To save space I might try a restricted form of the former, and if I’m doing that I may as well stick in a pear as well.  I’m still pondering what veg crops/varieties to try next year – but that’s all part of the “winter wondering” process, and that’s not to be rushed! Some of the tried and test varieties will return for sure (at least the ones that did well this year), but it’s also fun to try new things, and be a bit adventurous – so watch this space.

Infrastructure too is on the agenda – our allotment shed has had its day.  It’s a sentry box style one that has blown over numerous times over the past year, in the process upending the contents and loosing several wooden slats.  We’ve got our sights set on bigger things, and maybe even a little space outside the shed where one can pull up a chair and admire the view. 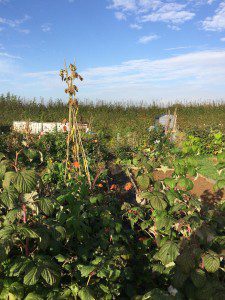 View over the allotment, October 2016