I’ve mentioned my love of walled gardens on this blog before, and last year visited Cannington walled garden, just down the road from where I live.  Barley Wood Walled Garden is another Somerset gem, requiring a glorious late summer drive from one range of Somerset hills (the Quantocks) to another (the Mendips). 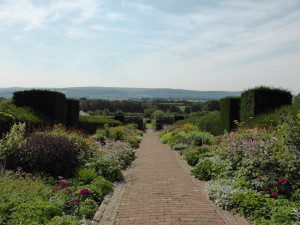 View out to the Mendips

The garden itself is free to look around and late August is a good time to schedule a visit as the double herbaceous border that bisects the garden is in its full pomp. Battalions of busy bees and butterflies were having the time of their lives, lapping up the nectar rich planting scheme of achillea, echnicaea, eupatorium, asters and sedum.  In time-honoured fashion, these blazing beauties were set against a dark green foil of thick yew hedging. 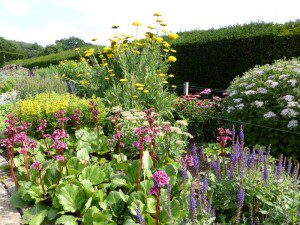 Laid out on a south-facing slope with a pronounced incline, the garden is perfectly situated to optimise any sunshine that might come its way.  On my visit it was positively bathed in the stuff.  While the herbaceous borders brimmed, the vegetable growing areas behind the yew hedges were sporting quite significant quantities of bare soil, but new sowings (for example of field beans) were just beginning to show – a garden is always a work in progress.  Incidently the soil itself was a joy to behold, richly red in colour and with a deep, fine tilth that I suspect is the envy of many a gardener. 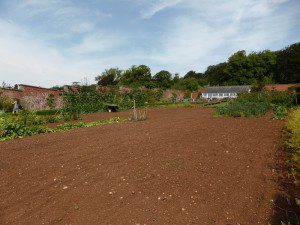 A cambered brick path leads up through the herbaceous borders to another great excuse for a visit – the award winning kitchen garden restaurant, The Ethicurean.  Situated in a greenhousey old garden building, and with fabulous views out across the garden and the Vale of Wrington beyond, the restaurant prides itself on using locally sourced food (including vegetables and fruit grown in the Walled Garden by head gardener Mark Cox). 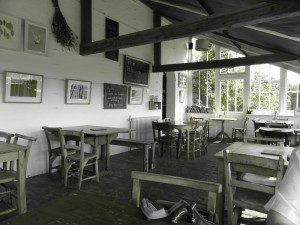 The local and ethical approach seems to have struck a chord and the restaurant has been acclaimed by the Observer as well as acquiring a Michelin ‘Bib Gourmand’.  If the ‘reserved’ signs on all the tables are anything to go by, the restaurant also has quite a following: we had to content ourselves with a quick midday coffee and a decent slab of sticky toffee apple cake before the lunch service got underway. 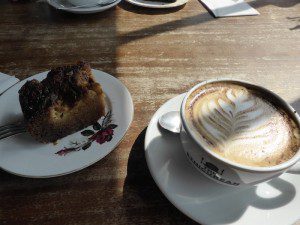 A dam' fine cup of coffee

Descending back down to the car park, there was time to explore the several artists’ studios that now occupy the old, wooden clad estate workshop buildings.  Nearby, the circular cider barn – easily mistaken for a chapel in its centrally planned solemnity- stands testament to the abundance of the apple orchards that surround the garden. 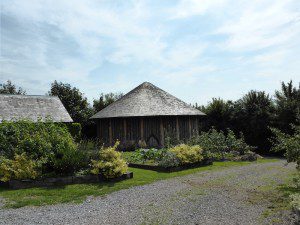 In January the Ethicurean Restaurant hosts its annual, sell-out Wassail to bless the orchard and ensure a bountiful apple harvest.  Judging by the heavily laden boughs in the Barley Wood orchard, the 2013 Wassail worked its magic successfully and the cider press is going to be kept busy this autumn. Complete with Mummers, live music, hearty “West Country Smoked Cider Welsh Rabbit and lashings of mulled cider the Wassail sounds like a hoot – is it too early I wonder to book for 2014? 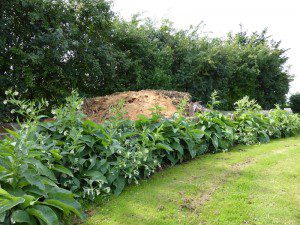