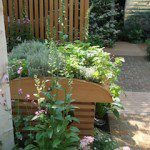 With only a few hours at my disposal my visit to this year’s CFS was necessarily a rather focused affair: it would have been impossible to see everything in less than half a day so for once I gave myself a break and didn’t even try.  I ignored the shops and made a bee-line for the show gardens.  Lovely, lovely, lovely although for my money the more appealing gardens were not the large rectangular plots that stake out the Show’s ‘Main’ avenue, but rather the smaller, less grand-standing designs dotted around the rest of the show ground.   Perhaps because they’re smaller, and somehow less intimidating, it’s easier for us punters to see and appreciate the detailing, and for me the stand-out show gardens were Chris Beardshaw’s The Furzey Garden and Jo Thompson’s A Celebration of Caravanning. 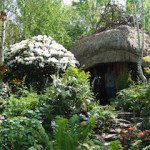 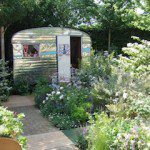 The former radiated an almost tropical warmth, and its thatched hut, super-abundant foliage and hot coloured rhodies and azaleas offered a characterful contrast to the tasteful meadows that predominated this year on Main Avenue.  Jo Thompson’s garden was smaller than it looked on the television, but its compact space was beautifully planted with a soothing white-pink-blue palette, which set ‘Doris’ the 1950s style caravan off an absolute treat – if every caravan had a parking place like this they need never go out on the road.

Doris had captured my heart but – fickle I know – she was quickly surplanted.  Over in the Artisan Gardens I found my true heart’s desire… a gorgeous, corrugated iron shepherd’s hut made by Plankbridge Hutmakers (www.plankbridge.com ).   Set in a naturalistic Dorset watermeadow garden designed by Woolcott and Smith, this ‘narrow-gauge’ hut (built specially for the show) had been kitted out as a writer’s retreat, complete with desk and daydreaming window, sheepskin covered chair, and the dinkiest woodburning stove I’ve ever seen.  And, having realised that one of the Plankbridge team, Jane Denison, was an old school friend from my Dorset days (and not seen for several decades) and made myself known, Jane invited me through the madding Chelsea crowd into the caravan itself.   Well, that was it – enamoured from afar, close up it was definitely love.  I want one, and I want one now… I just need to find a garden big enough.  Or perhaps I could park it on my allotment, for a bit of instant one-upmanship. 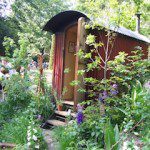