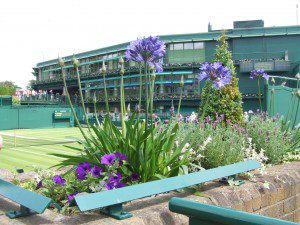 I was hoping to see some pretty good tennis on the first day of the 126th Lawn Tennis Championship Meeting at Wimbledon but what I wasn’t expecting on this – my first visit to the Championships – was top notch plantsmanship as well.  The courts themselves were of course looking immaculate and it was a thrill to see the grass before world-class tennis took its toll on its velvety pile, but it was the abundance of window boxes, borders and tubs around the grounds that immediately caught the eye.  Nattily themed in the AELTC’s signature purple and green colours, the planting was pristine – from the window boxes dripping with purple, mauve and white pansies to the deep blue lavender, campulas, ferns, and Festuca glauca used in the beds and borders throughout the grounds. 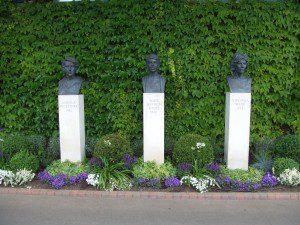 I couldn’t resist popping in to the Wimbledon Lawn Tennis Museum as well, which I last visited just after its change of location and upgrade.  It was particularly piquant to be seeing displays about the evolution of the Championships from their flannel clad amateur days (“the Final will probably be held on Monday”) to their smooth as silk modern set up while the pre-match crowds milled expectantly above us.   Sadly few made it into the basement level museum with us – perhaps put off by the additional £11 entry charge.   Their loss – we enjoyed playing ‘pull the covers’ and testing our return of play reaction speed on an interactive, push-button gizmo, as well as watching John McEnroe’s excellent locker room tour of Wimbledon greats.  Keeping things even more topical, the current special exhibition is themed around tennis and the Olympics – once the Championships are over it will be full steam ahead for Wimbledon’s groundsmen as they race to repair the grass in the time for the courts’ next appearance on the world’s sporting stage.  Pre-germinated grass seems to be the answer – and we won’t have long to wait to see how well the technique works. 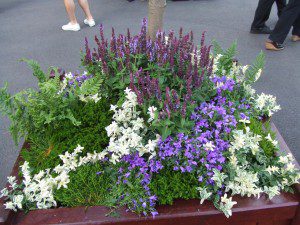