From Lawn to Largesse 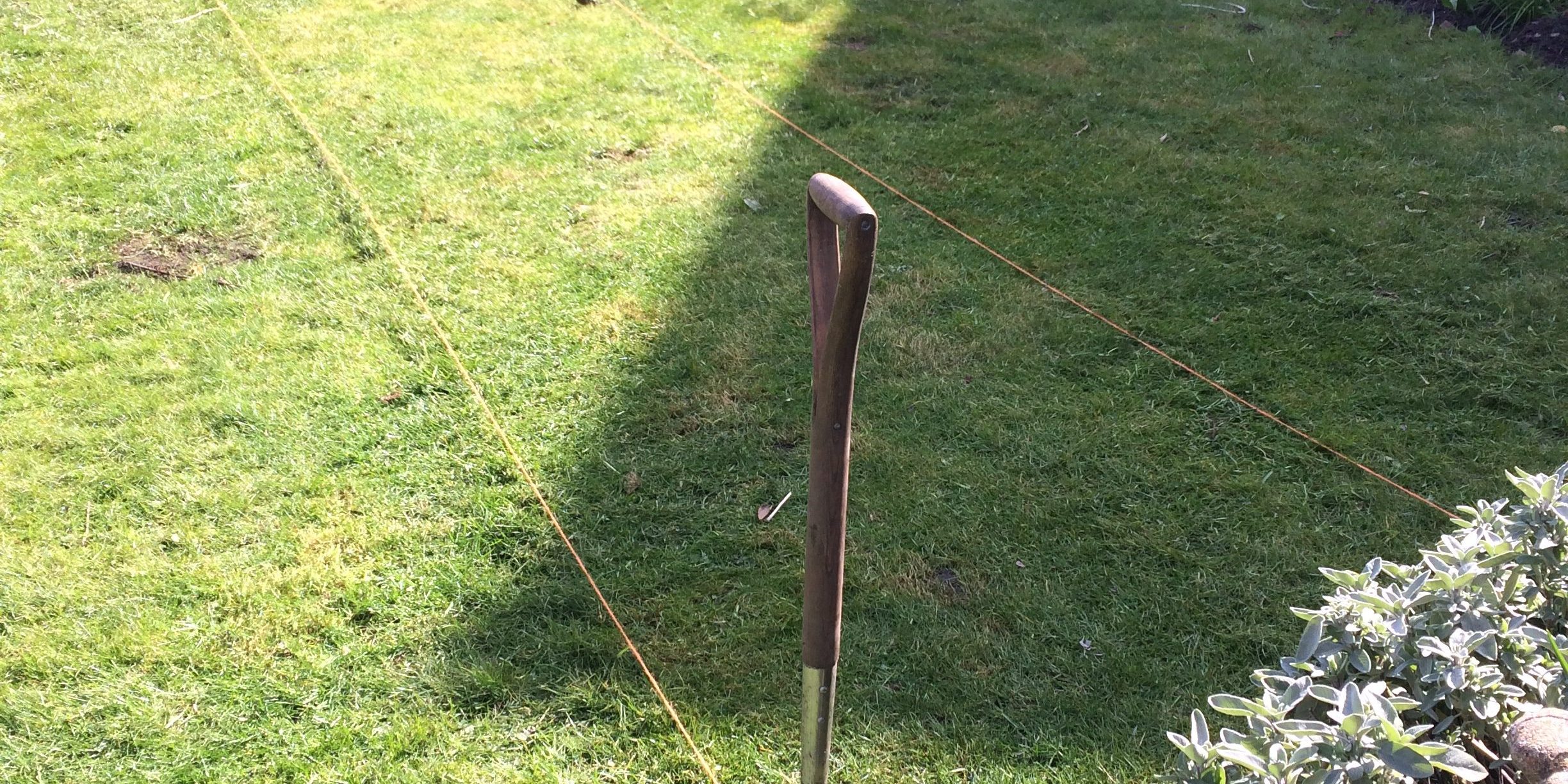 It’s amazing what a difference three months can make in a garden. In March when we went into Covid lockdown and panic buying prompted food security jitters I decided now was the moment to convert part of our small back garden into a vegetable plot. Our allotment is rather too prone to animal predation to be a totally reliable source of fresh veg and too far away to make picking a quick lunch time lettuce a practical option.

So with the vision of just being able to pop out to the back garden to gather a few fresh leaves, beans and courgettes whenever I felt like it – and at that point pretty much nowhere else to go but the garden – I set about transforming a portion of the lawn into to a couple of vegetable beds. 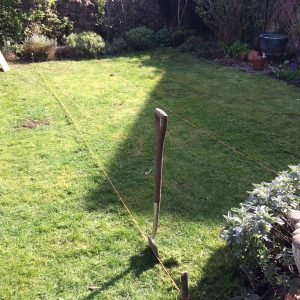 Their location, bisecting the roughly square lawn and aligned roughly east-west, was designed to capture maximum sunlight – which we lose during the afternoon for a while because of neighbouring houses. Little did I know that the design would later work perfectly for ‘socially distanced’ gatherings in the garden, with guests taking up their position on the far side of the vegetable beds, and hosts on the near side.

Taking the turf off the beds took two days and was one of those jobs you almost regret starting – even on quite a small scale it’s hard graft! 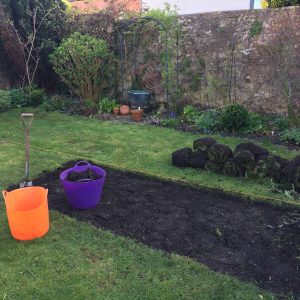 Once the turf was off the soil underneath was revealed as dark, friable and wonderfully easy to work. I would imagine the last time it saw the light of day was in the 1940s and 50s when, judging from old aerial photographs, all the back gardens on the street were ‘dug for victory’.  I rolled up the turves and tucked them in various corners of the garden to rot down and be added to the flower beds in due course. 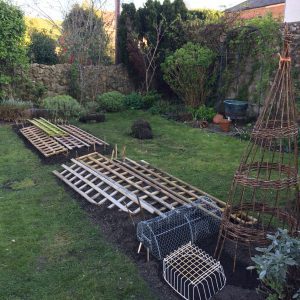 Having dug the beds I had to cover them up straight away to protect them from the attention of neighbourhood cats.  An array of old trellising and even an old dish drainer was pressed in to action for this vital role and turned out to be brilliantly effective. The make do and mend philosophy has been carried through in the plant supports, which are all old ones that I’ve had for ages. I’ll upgrade if the veg beds turn out to be a permanent feature but in the meantime thrift has been one of the watchwords of the project.

With the hard digging done, I turned my attention to raising a multitude of seeds in the conservatory. Hoping to cover a few culinary bases, the trays included lettuce, cauliflower, beans (French, Borlotti, runner and broad), cucumber, courgette, squash and tomato. 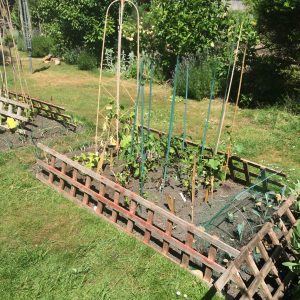 Lulled into a false sense of security by the warm sunny spring weather and getting a bit bored of rushing plants in and out of the conservatory to harden them off, I (like many others I suspect), planted out too soon and was caught out by the late frost in May. 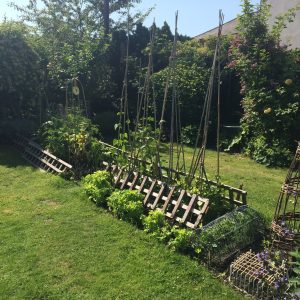 Luckily plants can be amazingly resilient! Once month on the beans and even the courgettes have recovered from their frost damage and are making their way in the world.  Although the courgettes are yet to produce a big enough fruit to pick, I did spot a few baby French beans yesterday. The lettuce have performed well and I’ve been dutifully succession sowing – the first indoor raised crop is beginning to bolt. Last night I headed off some of the bolters to make sautéed lettuce, peas and broad beans for supper with all the greenery supplied from the back garden – a tasty outcome that made all that hard graft in March worthwhile (recipe from Sarah Raven’s brilliant Garden Cookbook). The rocket and spinach have been doing well too and the carrots are looking promising (good news as I haven’t had much success with them on the allotment; they’ve particularly enjoyed the home soil conditions I think). I’m hoping for great things from the outdoor tomatoes too – as well as putting some in the new beds I’ve used planters and grow bags to hedge my bets. Even as we polish off the last jar of 2019’s green tomato chutney, I am keeping my fingers crossed for a decent crop of toms this year.

Born of a sense of necessity, getting rid of some of the lawn has been a surprisingly liberating experience. As well as being a productive and absorbing project that’s kept my sanity intact during lockdown, it’s made me realise you can do anything with your garden if you want to. So what’s next – dig up the whole lawn? Well, maybe, just maybe …

This website uses cookies to improve your experience while you navigate through the website. Out of these, the cookies that are categorized as necessary are stored on your browser as they are essential for the working of basic functionalities of the website. We also use third-party cookies that help us analyze and understand how you use this website. These cookies will be stored in your browser only with your consent. You also have the option to opt-out of these cookies. But opting out of some of these cookies may affect your browsing experience.
Necessary Always Enabled

Any cookies that may not be particularly necessary for the website to function and is used specifically to collect user personal data via analytics, ads, other embedded contents are termed as non-necessary cookies. It is mandatory to procure user consent prior to running these cookies on your website.