Going Dutch at the Wallace Collection

The Wallace Collection is one of my all-time favourite London museums, and so it was with some anticipation that I visited its refurbished Dutch Galleries on Monday.  This suite of three top-lit 19th-century picture galleries re-opened in March but I’ve been so busy finishing the London Garden Book that this was my first chance to see them in their new finery.

Newly bedecked with a vibrant royal blue silk wall-covering, these first floor galleries (which appear as “East Gallery I, II and III” on the floorplan) exude a swaggering self-confidence that at first glance threatens to overpower the paintings they contain.    But, helped by a sympathetic new hang, the Dutch Old Masters of Hertford House prove more than a match for their snazzy surroundings. 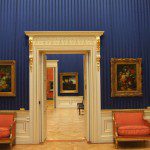 Each gallery has been thoughtfully themed, so while Gallery I is devoted to Rembrandt and his school, Gallery II is home to genre pictures (think boozy bar scenes by Jan Steyn and any amount of letter writing, lace making and lute playing ladies) while Gallery III sends the mercury rising with its exploration of the Italian influence on Dutch painting, and sun-drenched landscapes and a noticeably fewer clothes on its human subjects (put it this way, it certainly isn’t sheep that van der Werff’s Shepherd & Shepherdess are attending to…)

Within each gallery the paintings have been hung ‘conversationally’, perhaps the most obvious example being Gallery I’s father-son face-off between Rembrandt’s c.1637 self-portrait and his painting of Titus, painted around twenty years later.  (Incidentally, staring broodingly out of the corner of the same room, is The Toper, a fantastic portrait by Ferdinand Bol, which looks for all the world like the late Oliver Reed, glass in hand greeting visitors …)

One of the nice things about the Wallace Collection (in reality a ‘collection of collections’) is that you discover something new each visit.  After the Dutch Galleries, I swung through the Great Gallery (itself in line for a refurb later this year), paid my respects to The Laughing Cavalier, and pottered a while in the Nineteenth-Century Gallery.  Here I spent some time admiring the Napoleonic miniatures collected by the 4th Marquess, who evidently had a bit of thing about the pint-sized Emperor.  Easy to overlook in favour of the gallery’s on the wall attractions, the leather covered vitrines containing these small-scale masterpieces (not all of them entirely flattering to old Boney) are well worth a peek – portraits are perfect people-watching your way through history.

A spot of equally satisfactory real people watching followed in the Courtyard café over a refreshing elderflower pressé, followed by a quick visit to the best museum loos in London (own cubicles and washbasins, decent mirrors and room to swing an It-bag).  How very civilized, how very Hertford House.