The height of urban gardening

Land.  They’re not making any more of it, or so we’re told, and in cities even less so – which can make finding a decent garden a challenging proposition.  A small, shaded backyard, a long thin strip or a balcony are the most that many would-be urban gardeners can hope for and such unyielding sites often demand a radical approach in order to succeed.   A vertical garden could well be the answer, according to garden designer Daniel Bell and he should know, since he is the man responsible for the magnificent ‘living wall’ at the Athenaeum Hotel on Piccadilly, as well as numerous others across London, Europe and further afield. 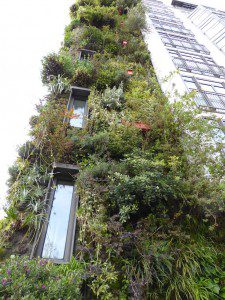 The Athneaeum’s vertical garden has been delighting hotel guests and passersby since 2009, when Daniel and his team installed the Patrick Blanc design, and they return four times a year to keep the 10-storey high wallscape in trim.  Routine maintenance jobs include weeding out excess volunteers – “we allow wild flowers to stay for a while as we don’t want it to look too manicured ”, Daniel explains.  Pollution from the busy roadside is another issue, requiring occasional replacements of plants such as choisya which die off after a couple of years or so, while on the other end of the scale less sensitive souls like solanum need to be kept in check.

Pruning follows the same seasonal patterns as in horizontal horticulture but other routine tasks like mulching are irrelevant, as are many of the usual tools – “secateurs, kitchen scissors and a staple gun are pretty much all we need up here”, says Daniel “it’s a low-maintenance garden really, if you consider how much time a comparably sized flower border would require.”

Gardening 10-storeys above pavement level in central London however requires a bit of forward planning – and a head for heights.  The former is simply a matter of logistics and making sure new plants arrive at the same time as the cherry picker; the latter is more of problem for Daniel, who suffers from vertigo.  Luckily his passion for plants trumps any misgivings he may have about aerial gardening – “provided I just keep looking at the plants, I’m ok.  I get by!” 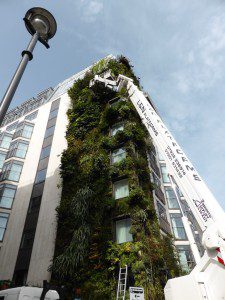 For Daniel, plants are one of the main attractions of gardening vertically.  “It’s such an interesting way of working,” he enthuses, “it’s really opened me up to plants I hadn’t used before as a designer.  Things like Stephanandra incisa, and Iris confusa.  Plus you can put a garden absolutely anywhere and that’s really fun!”  Daniel proves that last point both at his previous home in Sweden, where he installed a vertical garden inside the dining room walls, and in his latest commissions, which include an underground car park in north London, and a roof garden on the 25th floor of the new Trump Towers in Baku, the capital of Azerbaijan. 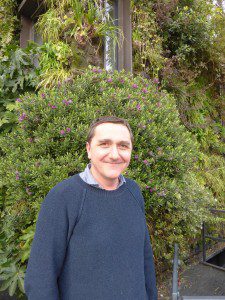 It’s the versatility of vertical gardening that makes it so relevant to urban sites – low light levels aren’t a problem since there are many shade loving plants to choose from (Daniel mentions ferns and pachysandra as just two examples), and lack of cultivatable land isn’t an issue since plants are grown hydroponically.  London’s warm microclimate opens up the choice of plants even further “it’s practically tropical compared to Sweden!” notes Daniel, who likes to use as many different plants as he can.  One of his favourite subjects for vertical planting are species fuschia:  “they are fabulous – in London gardens they can start flowering in April, May and they will go right through with only a short dormant period.  And you can eat the flowers as well!”

For those wanting to have a go at vertical gardening, Daniel suggests starting with a small project, planting lavender.  He recommends using a simple double layered felt, made into pockets (this is where the staple gun comes in handy). Carefully pick off all the compost from the plant and make sure the roots touch the felt at all times. “Don’t be tempted to use any soil at all”, warns Daniel, “keep the felt moist and the plant with root into the felt, no problem.”   Feed with a liquid food every so often.  It is also easy to raise seeds and strike cuttings in the felt, so developing a vertical garden need not be an expensive proposition.  For inspiration, simply hop on a number 38, 22, 19 or 14 bus between Hyde Park Corner and Piccadilly Circus, nip up to the top deck and hope that you get stuck in traffic just outside number 116 … you’ll have a ringside view of the finest vertical garden in London. 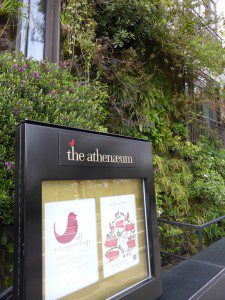 This article is based on an interview with Daniel Bell in London, April 2015.