The House That Dora Built 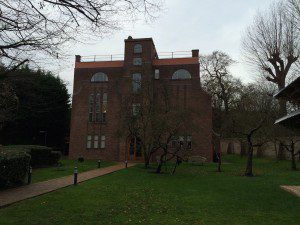 This imposing Modernist house was the studio-home of Russian sculptress Dora Gordine and her husband, the diplomat turned collector, the Honourable Richard Hare.  Designed by the couple in 1936, the house and its collections were bequeathed to Kingston University on Nadine’s death in 1991, and a major restoration programme was undertaken to bring the house back from dereliction.  Returned to its former glory, and recently relaunched as a museum, Dorich House holds an important collection of Dora Gordine sculpture and associated drawings, as well as the collection of Russian Imperial art (including paintings, icons, porcelain, glass, lacquer work, metal work and furniture) amassed by the couple. 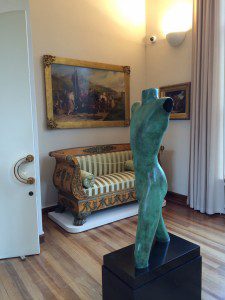 Although the house has been dismissed as looking like an ‘Eastern European telephone exchange’, its uncompromising brick exterior belies its characterful and elegant interior.  An introductory video plays in the ground floor Plaster Studio, and tells the eventful life story of Dora, and her unstoppable zest for creation (self and otherwise). The plaster portraits heads modelled by Dora include one of the actress Dorothy Tutin, and the room also contains photographs of previous homes designed by Dora. 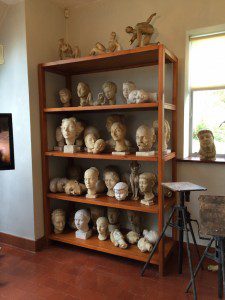 As a serious and successful artist, Dora made sure that Dorich House really worked for her and the entire first floor was given over entirely to her professional needs, housing a spacious north-facing modelling studio, and a stylish light-filled salon-gallery where she could showcase her work to clients.

Her work fills the room to this day, with pieces such as ‘Javanese Head’ and ‘The Chinese Philosopher’ revealing her longstanding interest in Eastern cultures. 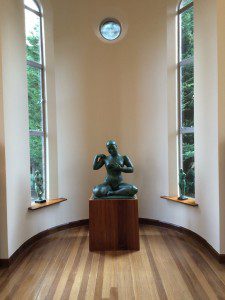 The apse in the gallery

The couple’s more modestly proportioned flat occupies the top floor of the house, with design features such as the sliding Chinese inspired ‘moon’ doors and quirky tiled fireplaces adding to the still-tangible Bohemian atmosphere of the house. 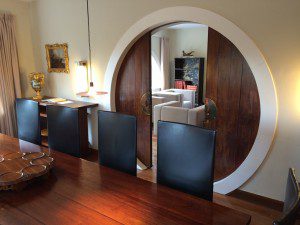 As featured in Museums & Galleries of London, 6th edition, published 18.5.16