I’m so lucky to live in the Quantocks.  Despite being an Area of Outstanding Natural Beauty (the first area to be so designated, in 1956), the Quantock Hills are usually gloriously empty of people, despite their relative proximity to Taunton, Bridgwater and Bristol.  It’s rare to meet many other walkers, even on a fine day, although mountain bikers are becoming a more frequent sight, and it’s not unknown to come across the odd group of bedraggled Scouts or DoE hikers.   Now is a great time to visit: after a long wet winter in Somerset, spring is  bustin’ out with a vengeance and the hedgerows suddenly seem to be brimming with flowers and fresh new growth.  There are lambs and calves in the fields and the trees and hedgerows are loud with bird song and whirring wings. 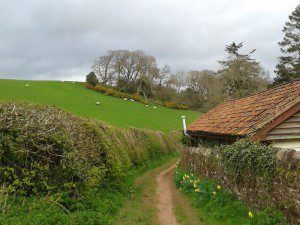 Today I didn’t have time for a long walk on the hills so I opted for a shorter circuit, heading out of Nether Stowey on foot along Watery Lane.  This path, flanked on one side by a brook,  is part of the Coleridge Way, a 36 mile footpath between Nether Stowey and Porlock.  Samuel Taylor Coleridge lived in Nether Stowey for 3 years between 1796 and 1799 and was a keen walker, thinking nothing of striding out from Nether Stowey to Watchet (the port town further down the Bristol channel which inspired  The Rime of the Ancient Mariner) and Exmoor beyond.   It was of course ‘a person from Porlock’ who famously cut short the poet’s opium derived momentum while writing Kubla Khan.  Other poems completed during Coleridge’s Quantockian period are This Lime Tree Prison my Bower and Frost at Midnight. An inspirational place indeed. 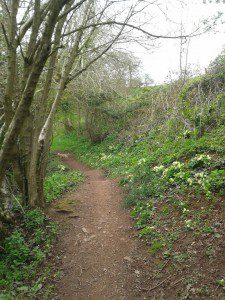 Walking today, albeit briefly, as the Coleridge Way tag line would have it,  ‘in the footsteps of the Romantic poet’, it was my turn to feel inspired.  It was pure pleasure to be able to stroll along in an unhurried way, taking a little more time and care than usual to observe the miracle of spring  taking place on my doorstep.  Here are just some of the seemingly humble, but beautiful hedgerow plants I came across, in the course of less than an hour.

Primroses, of course, so simple and so pretty, the yellow herald of spring. 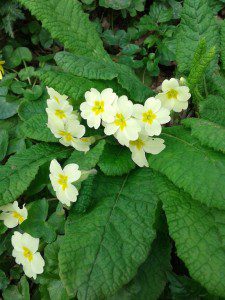 And one of my favourite ‘weeds’, Herb Robert.  I often leave it in the garden if it has put itself somewhere suitable, and although I know some people can’t stand the smell, it’s one I quite like… 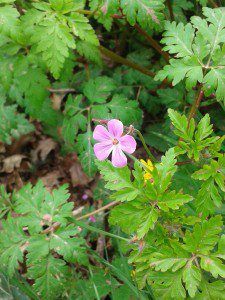 The herb they call Robert

This clump of violets made a welcome contrast to the predominance of primroses and celandines: 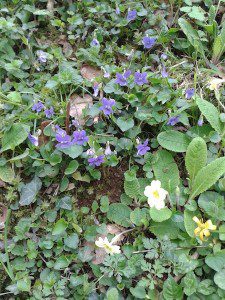 Along with a guest appearance by this pink campion (as you can seen, the stinging nettles are also doing very well at the moment): 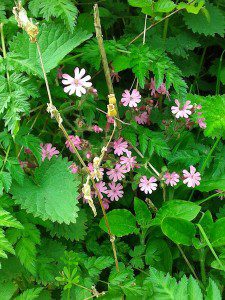 Watery Lane is also a good place for spring foraging and, as well as nettles, wild garlic is particularly abundant here.  I use it in salads and as a seasonal replacement for basil and garlic in pesto. 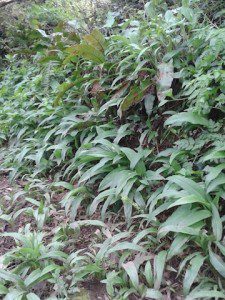 I know a bank where the wild garlic grows…

I also came across another member of the allium family and I’m wondering if it could be a “Bristol onion”.  By co-incidence, I only discovered the existence of  these ultra local wild onions earlier this week at the University of Bristol Botanic Garden.  Here are the Quantock ones: 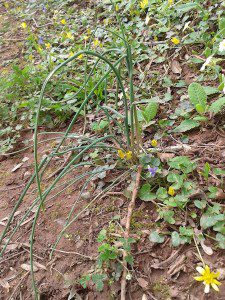 And here are the ones at the Botanic garden, helpfully labelled up: 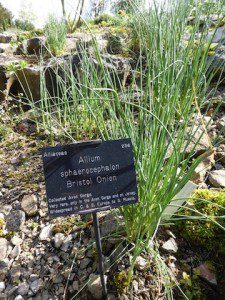 Moving my attention to what was happening at eye level, I noticed that the blackthorn blossom is still going great guns.  This shot, showing a unreconstructed tangle of bramble and blossom particularly appealed. 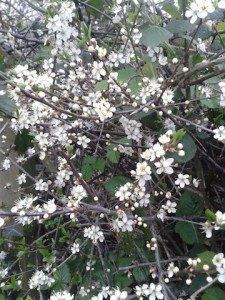 On the return leg home, walking in the shadow of Nether Stowey’s castle mount (the castle itself long gone, a victim of the Perkin Warbeck rebellion), I spotted these little stars peeking out from the overgrown hedgerow, alongside the ubiquitous nettle. 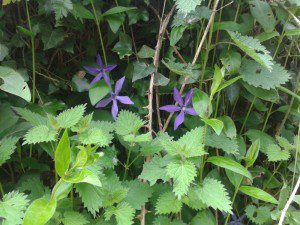 Periwinkles in the hedge

I really enjoyed my botanising walk  – true, there may have been no startling discoveries (unless I really have stumbled on a new form of local allium) but by making a conscious effort to pay attention to the small stuff that I normally route-march past, a well-worn walk was transformed into an uplifting experience – although unlike Coleridge, the strongest thing I’ve had today is coffee … 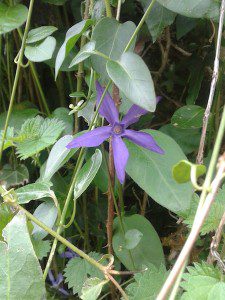 Star of the hedgerow