Medical man Dr Henry Stephens was the inventor of the famous ‘Blue-Black Writing Fluid’ and went on to become something big in ink.  His son Henry Charles (‘Inky’) Stephens developed the family business and brought Avenue House in 1874, adding a laboratory and planting the rare trees which can be seen in the landscaped grounds today. Stephens Jnr left the house and gardens to the people of Finchley and it is now run as a charitable trust, with the Stephens Collection being housed in the pretty Victorian conservatory. 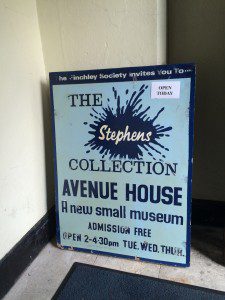 Displays explore the history of the Stephens Ink Company, and its expansion from Henry’s ink boiling experiments in his basement laboratory into a worldwide brand. 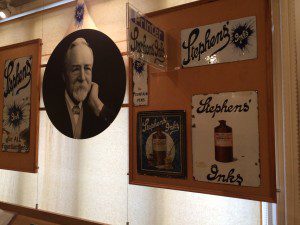 Its famous ‘ink blot’ logo was first registered in 1832 and can here been seen on vintage enamel advertising signs, a variety of ink bottles, and innumerable stationery products.  Other exhibits recall the fast-disappearing era of fountain pens, blotting paper, ink wells and ink monitors, and delve back further in time to even earlier writing technologies such as papyrus, slate and quills. 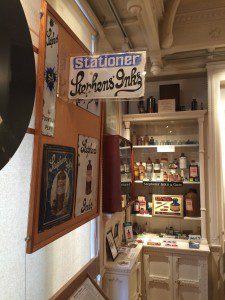 A redevelopment project is underway to transform the grounds and improve visitor facilities – something that Finchley resident (and former President of the Finchley Society) Spike Milligan would no doubt have approved of.  A life-sized statue of the late Goon sitting on a bench was unveiled in the gardens of Stephens House in 2014 and has become a popular destination for those wanting to ‘have a conversation with Spike’. 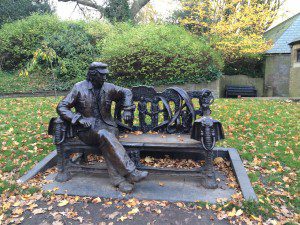