The Walled Gardens of Cannington 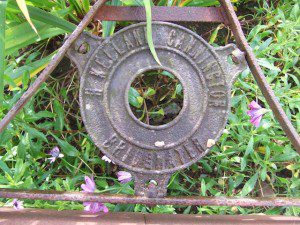 I don’t know about you, but I’m a sucker for a walled garden and last week I discovered a cracker just down the road from where I live.

The Walled Gardens of Cannington were officially opened in 2009 after a major redevelopment, but are built on a former monastic site that dates back to the 12th century.  Where medieval monks and nuns once roamed (rather too freely by some accounts), horticultural students and the general public now stroll – the gardens and old priory buildings being part of the Cannington campus of Bridgwater College. 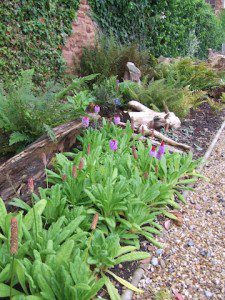 Three years on, the gardens are bedding in nicely with a surprisingly eclectic collection of distinct garden areas – some, like the herbaceous border and the productive garden, are fairly run of the mill but others are less so, such as a fern-festooned stumpery and the AE Bowles’ inspired ‘curiosity border’ with corkscrew hazel and contorted willow. The Blue Garden – composed around a rather angular student-designed water feature – offers a cool, monochromatic riposte to the flaming hot pinks, oranges and yellows of the herbaceous border – and is packed with blue notes of all tones, tints and hues courtesy of flowers such as Petunia ‘Easy Wave Blue’, Salvia farinacea ‘Victoria Blue’ and assorted agapanthus, larkspurs and lavenders. The Cannington Border showcases the easy-going charms of a selection of Osteospermum, all bearing the Cannington suffix, fruit of a breeding programme at the College. 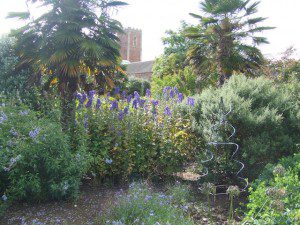 Sheltering behind the gardens’ nurturing walls (built in the local rusty red Quantock sandstone), the lush sub-tropical walk re-uses plants that remain from its earlier incarnation as a Spanish garden – giant Paulownia tomentosa (Empress tree), Trachycarpus (Fortune palm), Accas and Cordylines – to create a jungly walkway.  By contrast the nearby Dry Garden features a rustling collection of xerophytes such as Verbena bonariensis, Pennisetum and some pretty pink cosmos with temptingly ripe seed heads – all of which have confounded their reputation as drought lovers by obviously lapping up the wet summer of 2012. 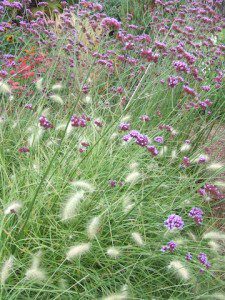 Perhaps the biggest surprise at Cannington however is its botanical glasshouse, which sucked up half of the garden’s £1 million redevelopment budget. At just over 1000 square metres it’s small fry compared to the glasshouses at Kew or Wisley but it is Somerset’s only botanical glasshouse – a fact that Cannington should perhaps be shouting a little louder about.  With six zones different climatic zones, the glasshouse offers a whistlestop round the world tour of arid, tropical and dry and wet temperate zones in the confines of a sleepy Somerset village – and with the West Country rain once again falling outside, it turned out to be the place to be on this late summer visit. 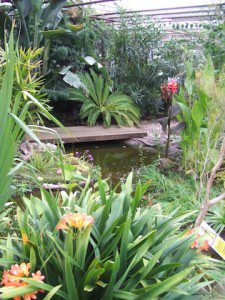 Inside the Botanical Glasshouse

The Walled Gardens of Cannington