Topiary or not topiary 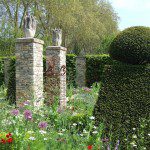 That is indeed the question for many gardeners – but at this year’s Chelsea Flower Show at least, exhibitors have answered in the affirmative.  Topiary anchored the designs of two, gold-medal winning, show gardens ( Cleve West’s Brewin Dolphin garden and Arne Maynard’s Laurent-Perrier Bicentenary garden) and appeared in several others too.   And perhaps its no co-incidence that both designers plumped for stately topiarised evergreens in gardens designed to celebrate their sponsors’ longevity (250 and 200 years respectively).

Over in the Great Pavilion, James Crebbin-Bailey’s Topiary Arts display also scooped a gold medal with a showcase of more playful topiary shapes, in the form of ‘teddybears on sticks’ and peacocks alongside the usual domes and spirals.  Among the unusual topiarised plants on display here were Phillyrea latifolia (used for topiary in the 17th century), Ilex aquifolium ‘Myrtifolia’ and several varieties of box, including the wonderfully named ‘Bentley Blue’ and Buxus colchica ‘Green Velvet’. 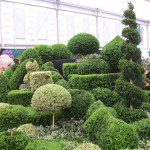 Although synonymous with the stately homes of olde England (at least before Capability Brown got his hands on them – think Levens Hall and Hampton Court), topiary makes a great subject for the urban garden, offering year round interest and the potential for a touch of humour too.   I’ve included an entry on it in The London Garden Book A-Z. 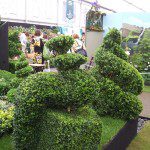