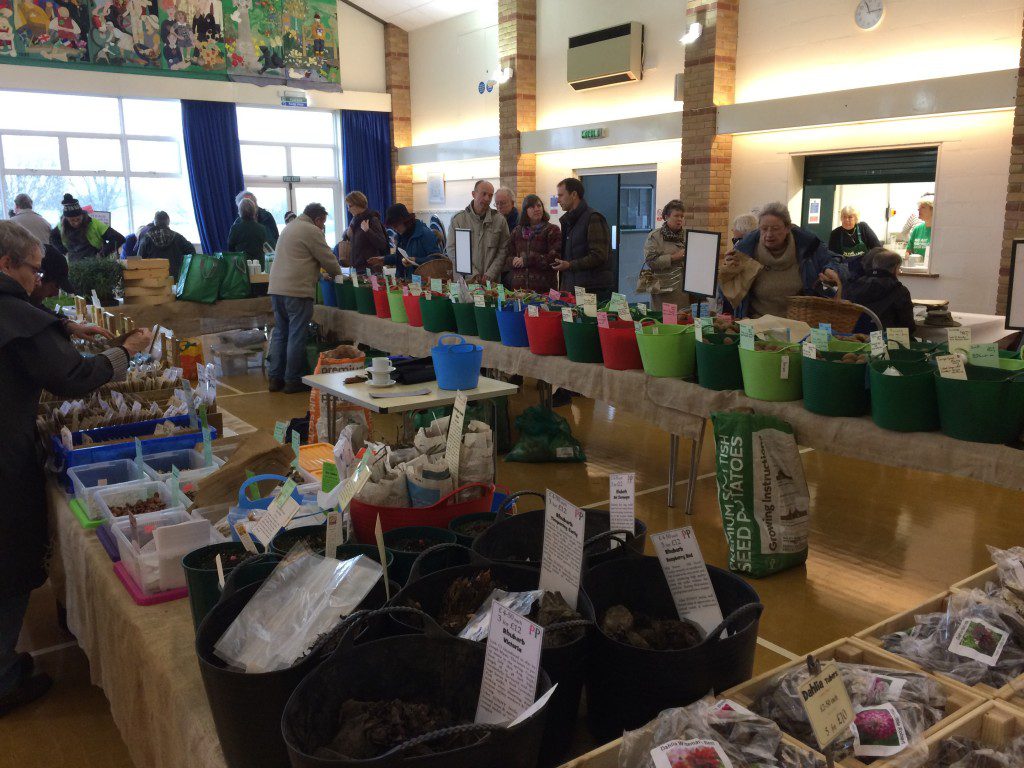 It’s a mistake to say that nothing of interest in the gardening world happens in January.  By the end of the month the days are getting noticeably longer, the green shoots spring bulbs are already emerging and, in this neck of the woods at least, gardeners have Potato Day to look forward to.

Last year’s PD was a frugal affair – by dint of not attending (see earlier post), I got away with spending a tenner.  Bargain! This year, we arbitrarily set the budget at £12 and had even, uncharactisterically, prepared a LIST, to avoid repetition, deviation and hesitation.  Needless to say that pretty much went out of the window on arrival, and we (that is to say, I) ended up spending around £33.But despite the infectious buying mood in Caryford Hall,  we didn’t go too mad and the £12 budget was probably unrealistic in the first place.  We got everything on the list but bought more potato varieties than I had anticipated  –  it’s rude not to when confronted by the panoply of varieties offered by the estimable Pennard Plants. 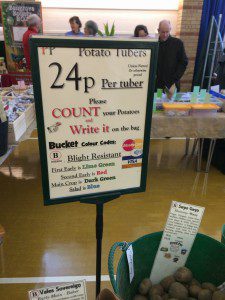 Potato Day: the rules of engagement

Ratte were on my hit list – sold out last time – and we got 10 tubers, along with 6 International Kidney (love the name, adding just a  hint of  Austin Powers to the allotment) and 5 Pink Fir Apples.  Desiree did well for us last year on the plot, and so I added 5 of these to the basket too.  We also went for 4 x Kerr’s Pink, and 5 x Maris Piper. A total of 35 tubers.  About 6 or 7 rows worth on our allotment, and hopefully a selection that will give us a long season (Int Kid waxy 1st early; Ratte waxy early main; Maris Piper floury early main; Desiree waxy early main, Kerr’s Pink floury late main;  Pink Fir Apples waxy late main). 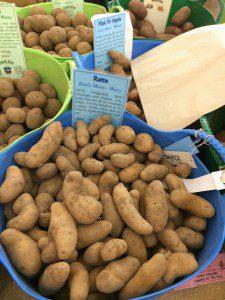 A Ratte! A Ratte!

No banana shallots this year so I’ll source these elsewhere and I resisted the garlic – an attempt at economy. We’ll plant some of last year’s bulbs instead, and see how they do.  I went a bit mad on garlic last year and planted so much that we should have enough to see us through until this year’s harvest. I did get onions, resisting the multi-colour mix to opt for a scoop each of Bamberger Long and Piroska Red (an improved Red Baron variety). 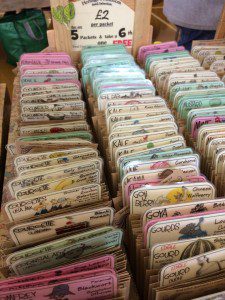 Despite having an overflowing box of vegetable seeds at home, it was impossible to resist buying a few packets.  A trio of brightly coloured beetroot (Chioggia Bullseye, Detroit Golden Round, Detroit Crimson Red), and a reputedly easy to grow outdoors cucumber (Burpless short).  I restocked with a packet of Pennard’s Blue Solaise leeks;  they’ve  done well for us this season on the allotment (we’re still pulling them and they are delicious).  Although I usually swear by  Sungold tomatoes, I’d thought we’d try something different this year, namely the exotic (and slightly sinister) sounding Black Russian, and Brandysweet Plum Grape.

At £2.50 a packet, dahlias were impossible to pass over.  And as good things come in threes, we went for:  Gerry Hoek, Bishop of Llandaff, Bishop of Dover.  But I’ll still be placing that order with Sarah Raven …